It might be hard to envision a path out of the debt completely controlling your life. Perhaps you aren’t making progress because you don’t know how to manage your debt.

Or maybe you just need a way out since you’re in over your head. Your thoughts may be turning to bankruptcy.

People who are unable to pay their bills on time have the legal option of declaring bankruptcy, which may provide relief.

There are benefits and drawbacks to declaring bankruptcy, even though doing so might relieve an enormous financial load. For instance, even while it might provide you with a fresh start, it may be difficult for you to later qualify for new types of credit.

The choice to declare bankruptcy should be thoroughly thought out, taking into account both the advantages and possible relief it might provide.

Consider the advantages and disadvantages before filing for bankruptcy if you’re considering it.

There are various situations when declaring bankruptcy could be your best (or only) option:

You’ve Already Made an Attempt to Bargain

Imagine that you have approached one or more significant creditors to discuss a repayment plan, as legitimate credit repair companies sometimes advise as a first step, but they have not budgeted.

They refuse to accept a payment plan and demand full payment, and you lack the resources to comply. You may be left with no choice except to declare bankruptcy as a result of this. Or, of course, turn to Fit MyMoney so that this does not happen. That would be a much better story for you.

Your Debts Are Far More Than Your Income and Assets

Another main reason why people declare bankruptcy is that they are unable to pay their bills, and the cost of merely maintaining the debt making the necessary monthly payments exceeds their monthly income.

If this person’s monthly income is a mere $1,500 and their available assets total $20,000, they may not have many choices outside of declaring bankruptcy.

In any other case, they will run out of resources in approximately a year and be unable to continue making the $3,000 payment.

What Effects Does Bankruptcy Have?

When deciding to file for bankruptcy, many Americans began looking for alternatives or trying to pay off their debt.

Annual number of bankruptcy cases filed in the United States from 2007 to 2021, by chapter 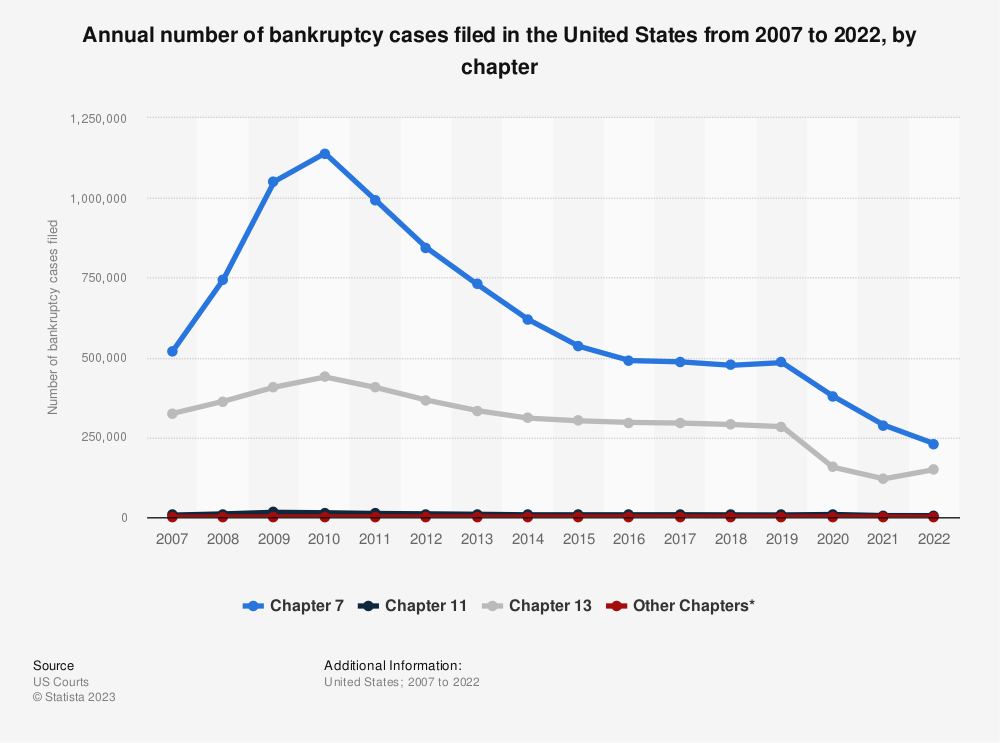 Consider the following points for this:

Your credit score has probably already suffered due to nonpayment, but declaring bankruptcy will make it far worse.

Because there are too many variables at play, it is hard to predict precisely how much it will fall, but experts generally agree that the higher your score, the more you will fall. There might be a 200-point decline in your score if it was higher than 700.

If someone co-signed your loan, they pledged to make the payments if you are unable to. The co-signer will continue to be responsible for paying in Chapter 7 bankruptcy.

Even if your bankruptcy case is dismissed, creditors may still pursue you for payment (successful). A distinct tale is told in Chapter 13.

Co-signers are also covered by the protective stay that stops creditors from pursuing payments after you file for Chapter 13.

As long as you continue to fulfill your obligations under your Chapter 13 agreement, the stay is still in place.

Your Assets Could Be Seized

During the bankruptcy procedure, the court could confiscate some of your possessions and sell them to pay your creditors.

When you declare bankruptcy, your identity is made public. Although it won’t be shown on a billboard in the city, anybody with a PACER (Public Access to Court Electronic Records) account may access it.

The required meeting with creditors takes place in front of the public, and it is recorded on your credit report for anybody with access to it.

It could have appeared in the legal notices of your local newspaper in certain locations, however, this is no longer common.

Although the term bankruptcy is unfavorable, there may be some positive outcomes. You could feel more equipped to manage your money than you did previously if allowed a fresh start.

You Could Consider Debt Consolidation

It’s challenging to make debt payments when you just cannot afford to. By combining your debt into manageable installments, bankruptcy might provide some debt relief.

Your liability for certain debts may sometimes be eliminated. This depends on the filing you choose.

Possibility of Keeping Your Possessions

You may retain items like your house, vehicle, or retirement savings if you file for bankruptcy under Chapter 7 or Chapter 13 since there are certain personal exemptions.

An expert should be consulted if you are unsure of what property may be in danger since exact exclusions rely on your state’s regulations and the value of your assets.

There is no assurance that you will maintain all of your assets, even if in certain situations some may be safeguarded – notably under a Chapter 7 filing.

If you own a house or have other significant assets, filing for bankruptcy under Chapter 13 is often the safest choice.

Chapter 7 Bankruptcy is Expedient to Accomplish

Which option you choose to file under will determine how quickly you may finish your bankruptcy.

Often, a Chapter 7 bankruptcy may be finished in less time than six months. This implies that you will be able to resume building credit quite soon.

In contrast, the obligatory repayment plan for a Chapter 13 petition may take years to complete.

The Act of Declaring Bankruptcy Ought to End Collection Efforts

When you declare bankruptcy, your creditors are prohibited from contacting you about debt collection.

In fact, from the time you file for bankruptcy until the debt is erased, creditors aren’t permitted to get in touch with you.

Whether you’re being pursued an unpaid bill, check to see if you’re still accountable for it. Not all debts will be forgiven when you file for bankruptcy (more on that below).

Some individuals may be forced into bankruptcy as their only option, but filing for bankruptcy should not be taken lightly.

It is worthwhile to get advice from a qualified credit counselor before making any choices and to attempt to negotiate with creditors to see if you can agree on a payment schedule.

Another necessary stage in the bankruptcy process is credit counseling.

It could also be a wise investment to consult a lawyer before making your decision. If you eventually decide that filing is your only option, keep in mind that doing so will do long-lasting but temporary harm to your credit.