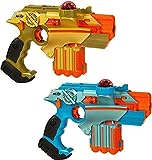 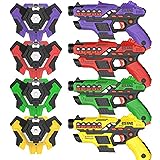 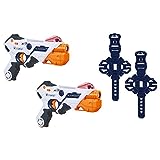 Have you ever thought how great it would be if you could play your favorite video game in real life? Well, no doubt you have. However, what if we tell you this is actually possible? Yes, you can really run around and shoot with laser guns. But how? The answer is laser tag sets. Using these will allow you to transfer the virtual battle arena right into your backyard, into the real world. You like this idea, don’t you? Well, if so, below you can find out which are the 4 best laser tag sets in 2022. So, if you’re ready, let’s get started. The tag game involves 2 or more players, and as such, is a great way to have fun with your friends or family. However, the problem occurs if you want multiplayer battles but don’t have enough laser weapons. For example, this one by Laser X comes in a variant with two laser guns. Well, to be honest, that would be insufficient in some larger gaming ventures.

Fortunately, there is a 4-player laser tag set, but at the time of writing, it is not available for purchase, at least, not by Laser X. Until it is in stock again, we will have to settle for this for 2 players.

Although the contents of the set itself, i.e. the number of laser guns you receive, cannot be considered a drawback, we have one problem with this set, and that is the lack of a wireless connection. Namely, the target vests are connected to the gun by a small cable, and this can be considered unsuitable for your maneuvers during the game itself, right?

Still, on the other hand, there is nothing more to complain about this tag set by Laser X. For example, light effects are a great thing, especially if you decide to play at night. Also, sound effects, as well as feedback on the status of the player, are considered very suitable. Another 2-player set comes from Nerf. If you’re a bit into laser tag sets, and regularly check the market, then no doubt you know that the Laser Tag series from Nerf was the forerunner of the fantastic Laser Ops Pro edition that was released about two years ago. Well, why do we mention all that? Simply, the best laser tag set that comes from, conditionally speaking, the old series, is this Phoenix LTX.

What is so special about these laser guns? Well, it can be said to be everything from design to functions. And indeed, today’s market has a lot of laser weapons inspired by video games, which are similar in many ways, both in design and in everything that a laser tag set has to offer.

Well, when it comes to Nerf, they did it a little differently with the Phoenix LTX. First of all, the design is not common, but rather reminiscent of retro gaming gear. When it comes to functions, you can adjust the firing range, and if someone hits you, there’s no way you won’t notice because of sound, light, and vibration warnings.

In addition, there is a shield function, ammo indicator, strength setting (value between 10 and 25 after which you are eliminated), etc. All in all, the Phoenix LTX is in many ways a special laser blaster and stands out even from some newer models. Ok, so far, we’ve only talked about 2-players tag sets. Now it’s time for a bigger party. We add two more laser blasters, which means two more players. Prepare for battle! The great thing about this laser tag set is that, above all, it has four laser guns. An even better thing is that they all come in different colors. So, if you buy several sets, you can make teams (for example, red, green, purple, and blue team).

When it comes to features, special effects are a great thing. Indeed, what this laser tag set has to offer is top-notch, starting from real smoke effect, fantastic light and sound effects, over 150 feet (just over 45 meters) shooting range, to 5 weapon modes, etc. However, that’s not all because in this set you also get four vests that are equipped with vibration function, as well as sprayers filled with water that splashes when you are eliminated. Great, isn’t it?

In addition, we must emphasize that here we have a small LCD display that allows you to check your parameters such as ammo, remaining lives, etc. In the end, the great thing that definitely positively surprised us was the fact that the batteries come in a pack, 24 in total (6 for one set of the vest and laser gun (3+3)). At the first place of the best laser tag sets in 2022, there is another set by Nerf. As we mentioned earlier, this is a version that belongs to the Laser Ops Pro series and which appeared on the market about two years ago. Honestly, even though it’s been over 24 months since we first got a chance to buy these blasters, it can’t be said that, in any sense, these are inferior or “outdated” compared to any other laser weapon on our list.

First of all, we must emphasize that AlphaPoint guns (there are also rifles in this series called DeltaBurst) have a fantastic design. Really, just look at these two. They simply “scream” you to take them and start a new laser battle. When it comes to features, there is no doubt that the most interesting is the smartphone laser tag feature. What is this? Well, if you download an app that you can find in the Google Play Store or App Store, you can include your smartphone in the game.

Set includes armband that actually serves as smartphone holder during the game on your hand so you can track your performance, but also track other players. If you think that using a smartphone is unnecessary, you don’t have to do that since these laser blasters work perfectly without them. Finally, we must add that AlphaPoint Laser Ops Pro blasters have excellent sound and light effects, ammunition indicators (as well as a quick-reload button), and a health indicator.

All in all, it is a great choice and there is no doubt these laser guns will bring great fun.

Take a look at these awesome models:

Well, the conclusion can be nothing but that these laser tag sets are really a great thing to have fun with friends and family and that whichever you choose, you will certainly not go wrong. Basically, the more players the better, so you can think in that direction.