It’s going to be driven by a V8 engine taken from a Corvette.

A Colorado physicist and his son have taken 3D printing to the next level. Even though it came out more than eight years ago, the Lamborghini Aventador is still a head-turner thanks to its wild styling.

Over the past year and a half, laser physicist Sterling Backus and his son Xander have been working on a mostly 3-D-printed, fully functional, life-size version of the supercar, according to Design Boom. On a Facebook page dedicated to the ambitious project, Backus wrote that their goal is to “show kids how cool science and engineering are, and demonstrate the power of technology.”

Sterling Backus, the scientific director of KMLabs Inc., is building a 3D printed version of the Lamborghini Aventador, a US $ 400,000 supercar that looks similar to the Batmobile.

Backus said he got the idea to make a lookalike about 18 months ago after his son became enthralled with the car while playing the racing video game Forza.

“We got into a Lamborghini Aventador in the game and (my son) thought that was a fantastic car and so he asked me if we could build one,” Backus said.

For safety reasons, the lookalike has a steel frame, but the panels, the interior, and several other parts are fully 3D printed. Backus aims to use a supercharged engine from a 2003 Chevrolet Corvette to run fast.

“It’s — I would say — about 75 percent complete,” Backus said. “We think we’ll get it on the road probably in about an October timeframe.” Once the car is complete, he aims to take it to local schools with the hope of inspiring children to pursue a career in science.

Despite the high price of real Lamborghini, Backus said he had a budget of only $ 20,000 for the project and hopes to fulfill it.

Utilizing 3-D models for the car he found online, Sterling and his son first tweaked the designs using SolidWorks, a computer program for solid modeling. Then, they plied three different 3-D printers to produce body panels, taillights, headlights and air vents from a variety of plastics, Sterling told 3D Printing Media Network. For body parts, they used polylactic acid plastic derived from biomass, to help withstand warping, while three other lighter thermoplastics were used for the headlights and taillights. 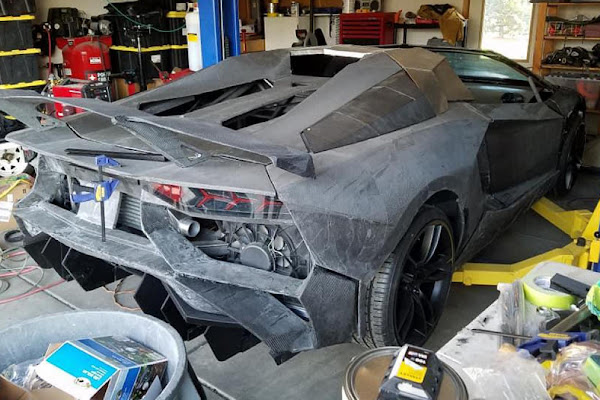 For interior parts that required extra strength, they’ve used carbon fiber infusion and encapsulation to add solidity and support where necessary. They’ve also relied on CNC machining, using a mill and lathe from Backus’s work, along with waterjet cutting for hinges and suspension parts. The car’s frame, suspension, and drivetrain are also all made of steel.

Sterling quickly noticed that he and his son are not simply copying the Aventador; they are using it as a basis to create something new. “The design of the parts is based on the Lamborghini Aventador, but we have significantly changed each panel to add our design style,” he told Design Boom. “Also, no molds are made, and none is for sale. This is a unique project, and not for sale. “

So far, the project has delayed the $ 20,000 Backuses, which may seem like a lot until you compare it to the cost of a real Lamborghini. A real Aventador, ready for the road of the Italian automaker starts at $ 639,670.